Written by a CURE staff member

“I believe I can fly. I believe I can touch the sky.” These are the words to Wilson’s favorite karaoke song, which is a wildly popular pastime in the Philippines. “I want to become an engineer, a doctor, and a seaman. I also want to go to Paris and live there just like my cousin. I would like to see beaches from all over the world and spend time walking in the sand,” said Wilson.

These are some of the things that Wilson hopes to do in the future, but one that he really prays to be doing again is to ride his bike in the park. It’s different when you aspire to do something that you’ve never done before. It's another thing to hope to get back to what you used to be able to do. I can no longer ride it because the pain in my leg gets worse at night,” Wilson tells us.

Wilson’s dad, also named Wilson, noticed a bump growing on little Wilson’s right leg when he was four years old. Over time, it started to spread throughout his leg. Consistent readings of three biopsy results show fibromas, non-cancerous tumors, but recurring and spreading everywhere. Starting in 2018, Wilson has received three surgeries from a local hospital to get rid of the growing tumor. However, it still continues to grow. 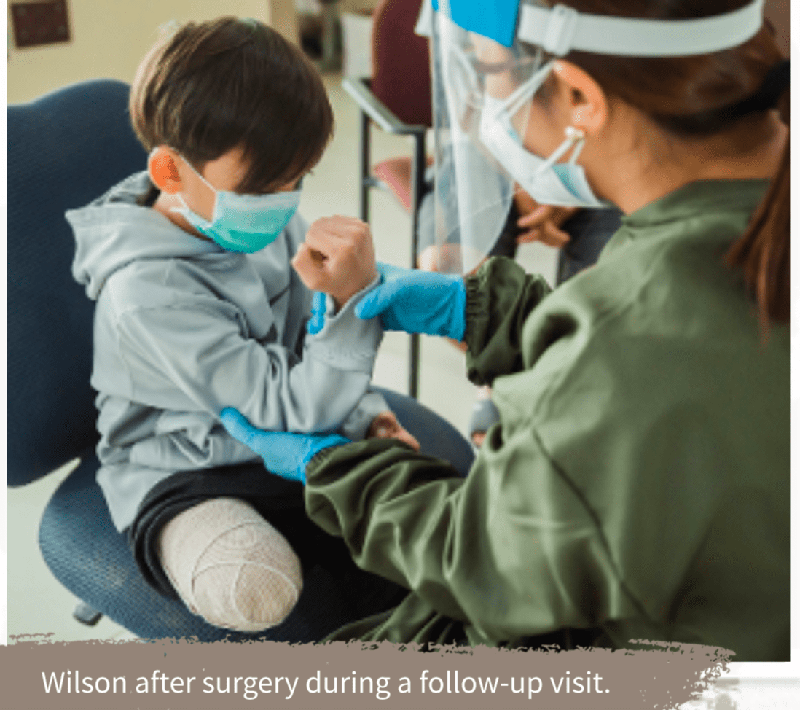 “January 2020, we tried to get another surgery, but because of the coronavirus, he couldn’t be scheduled,” his dad Wilson shares. “Thus, the tumor grew rapidly. When travel restrictions were lifted, and we got a chance to come back and see the doctor, we were told that the only option to stop the spread of tumors throughout his entire body is to amputate his leg. So, we came to ask for help at Tebow CURE.”

Wilson can no longer use his right leg because of the pain. He hops around carrying the other leg that is no longer of use to him. “I told my wife that Wilson’s leg needed to be amputated, but we allowed Wilson to make the decision. We convinced him that if his leg would be amputated, he would be like Iron Man with a robot leg.” Dad Wilson said.

Tebow CURE’s Prosthetist and Orthotist Keziah showed Wilson examples of what his leg would be like. “It hurts to know that my leg will be amputated, but I accept the truth,” little Wilson told us. Wilson’s family is truly thankful to God that he’s a brave kid. When the process is all over, Wilson’s dad will no longer have to rub his leg at night when he is in pain.

Losing a leg is no small feat, a storm that no child should ever go through. But God, in His loving grace and mercy, allows us to go through difficulties. So when He redeems, His name will get all the glory. Wilson knows that as he waits for this storm to pass by, he always has God’s hand to hold on to.