“Believe in yourself that you can do all things because you are capable. You are a beautiful creation of God. Your ability is stronger than your disability. You’re not fighting alone because God is with you all the time, and He will give you the strength you need.” Mona

For our patients, these are encouraging words especially coming from someone that has also personally dealt with a disability and hoped for healing. Mona was born with clubfoot and without a left leg, and she was eventually referred to CURE Philippines (Tebow CURE). So, her words have a lot of impact on our patients which serves her well in her role as a social worker.

Mona is intentional about building relationships with our children and their families, and her background of growing up with disability allows her to perform her job with sincere empathy. “I grew up being bullied. I’ve been belittled and people made fun of me. I was told that I walked like a penguin,” Mona told us. Although her family sought help hoping to get a prosthetic leg for Mona, the lack of the right information left her condition untreated. 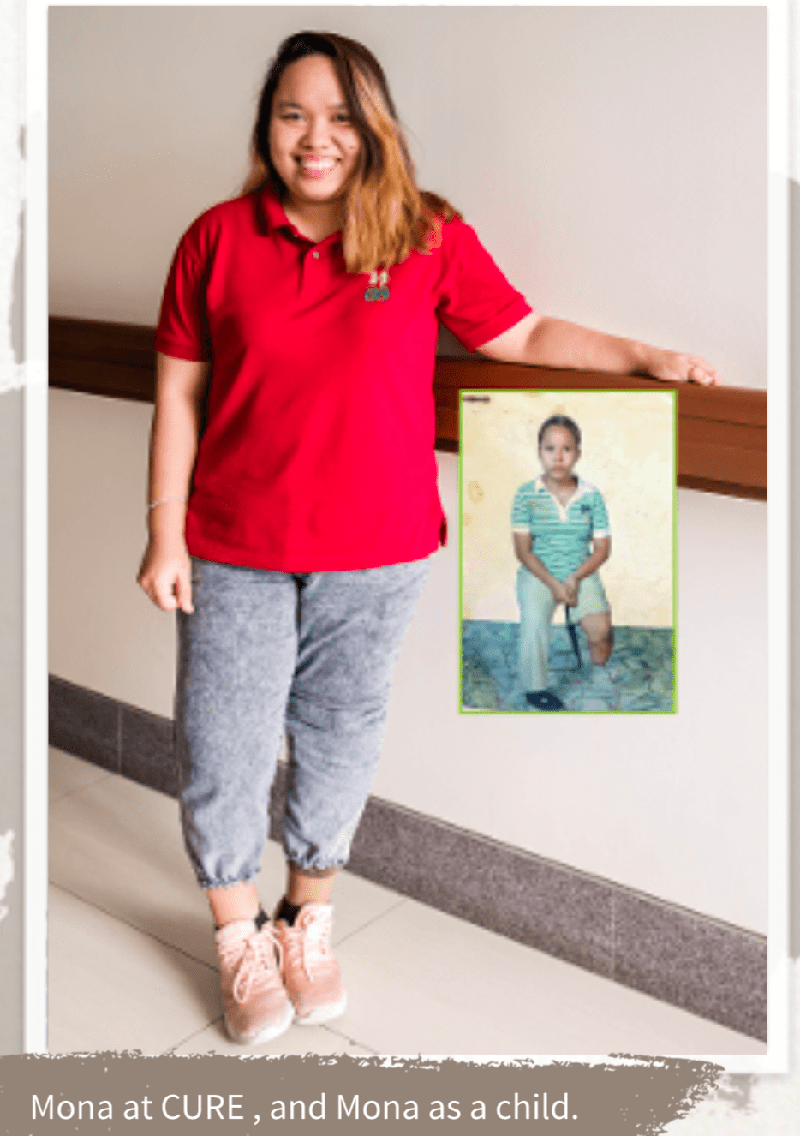 Mona first learned about Tebow CURE through a mother whose child was healed from clubfoot, but she was not ready to drop out of school and go through months of treatment. Instead, Mona waited on treatment and completed her education and training to become a social worker.

Little did Mona know that she would be walking into Tebow CURE years later as part of our team. “After I graduated and passed the license exam for social work, I asked for God’s guidance. I prayed for a job with purpose and a workplace that would lead me closer to Him,” she shares.

Mona is a voice for those who can’t speak for themselves. She is able to use her past experiences to identify with patients and speak life to them through God’s Word. “I once met a mother with a one-year-old daughter with clubfoot during one of our mobile clinics. She had eight children, and her husband had no fixed income. Due to financial constraints, it was their first time seeking medical advice for the daughter’s condition, Mona explained. Afraid of the unknowns, the mother refused surgery for her daughter. It broke my heart to know that she was acting out of fear. So I shared my own story and the regret that came when I didn’t go through my own surgery. I told her that God loves her daughter so much and has sent this opportunity for healing through Tebow CURE. She was teary-eyed and all I could do at that moment was to give the mother hope for her child’s healing. My job isn’t easy, but I believe that this is my calling.”

Mona goes on to explain her thoughts on treatment for herself. “There are times that I still want to undergo treatment since it’s been my dream as a child to be able to wear heels. But at the age of 23, I know that the healing and recovery process would be more difficult than if I were younger. If it weren’t for my disability, I wouldn’t be who I am today.” Hope Within the Dark Corners of the Philippines
Read Story

Hidden In The Darkness: A Letter From Tim Tebow
Read Story